Anyone who has been following my blog for a while (thank you!), knows I love to visit places of cultural and historical importance. I am particularly fond of Buddhist temples and Shinto shrines. Nanzoin Temple is one of the most breathtaking I have had the pleasure of visiting. Here is why it’s worthy of your time.

Nanzoin Temple sits high in Sasaguri, Fukuoka Prefecture, Japan. It can be easily reached by train from Hakata Station, Fukuoka City, in around 20-30 minutes (stop name is Kidonanzoinmae). A short, easy walk from the station, you will find the entrance to the temple. There is a bridge to cross right outside the station, take a closer look. It has little bars on it that play musical notes! The walk itself is pleasant and peaceful. Sasaguri is very pretty, be sure to soak it up on your way to the temple. 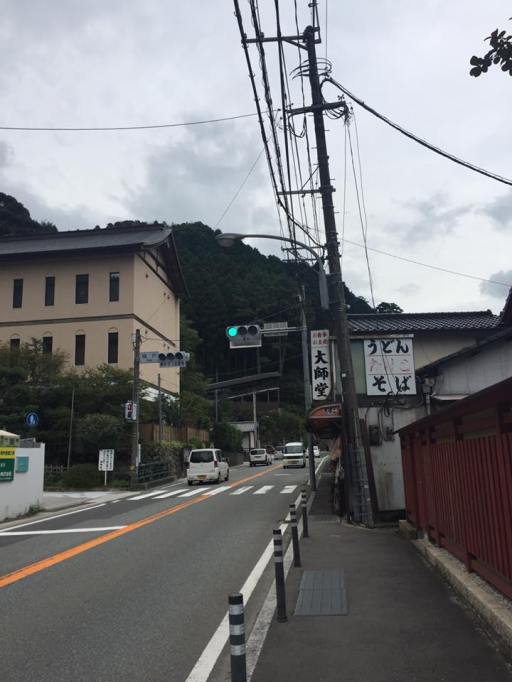 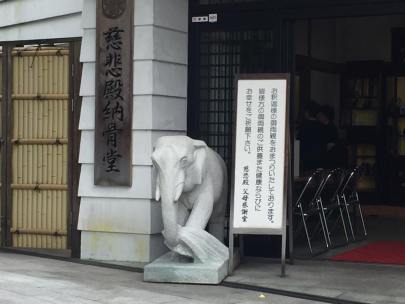 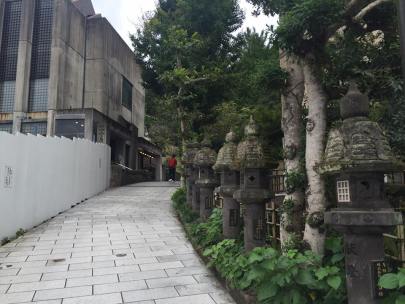 Nanzoin Temple used to sit atop Mount Koyasan, but after anti Buddhist authorities threatened to destroy it in 1886, it was relocated. An outcry lasting a decade eventually led to the relocation of the temple to Sasaguri in 1899. It is a Shingon temple, the main temple of the 88 that make up the Shikoku pilgrimage route, one of the three great pilgrimage routes in Japan. It enjoys over a million visitors each year, and is strongly associated with luck and fortune, after a chief priest won the lottery. It is said he laid his ticket next to a statue of Daikoku (one of the seven lucky Gods). The temple has made claims of similar stories.

The day I visited was overcast and rainy, but it didn’t take away from the beauty of the place. The site is large, so expect to spend a good portion of the day there. I started off by walking through the tunnel, towards the most famous landmark of Nanzoin (more on this later). At the other end, you can find a Koi pond, an Inari shrine (it’s common to find temples and shrines close together or even on the same site in Japan), and an admin building selling omamori (lucky charms). There are paths leading past this, around the small shrine, and with views of Sasaguri.

entrance to the shrine 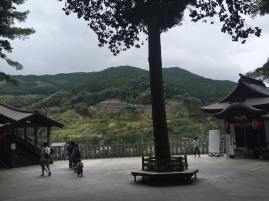 Passing this, you’ll see winding paths going up and all over, peppered with homages to Buddhism. There are garlands of paper cranes, Buddhist statues, and one very strange, very western looking statue. 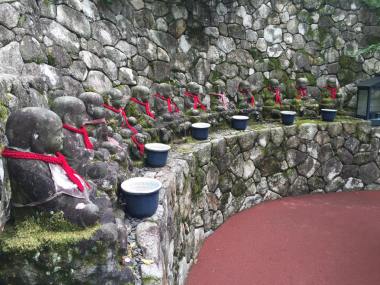 I have no clue what this is for, it struck me as out of place, but nontheless interesting.

heading straight, you’ll come to an open area, with more statues, another, smaller Koi pond, and the pride of Nanzoin: the giant reclining Buddha. Let’s talk about him next.

The reclining Buddha of Nanzoin.

Built in 1995, the “Nehanzo” or “Shaka Nehan” (Nirvana) sits at 41 metres long, 11 metres high, and weighs almost 300 tonnes. He depicts the Buddha at the moment of death, the reaching of Nirvana (enlightened state). Within the statue, sits the ashes of Buddha himself, and two of his adherents, Ananda and Maudgalyayana. These were gifts from Myanmar, a thanks to the temple for its donation of medical supplies to orphans in both Nepal and Myanmar. Also contained within the statue is sand from the 88 temples that make up the Shikoku Pilgrimage.

The feet of the Buddha are adorned with beautiful gold sutra, and he looks out over the mountains of Sasaguri. Every year, hundreds of Buddhists gather to clean the statue with bamboo leaves tied to 5 metre poles.

Gold sutra adorning the feet of the statue.

You may be wondering why this statue is so unusual. At least in Japan, the depiction of Buddha reclining is not common. More so, you’ll see Buddha depicted sitting (most common pose in Japan), or standing. Reclining Buddhas are more common to behold in South East Asian countries such as Thailand. 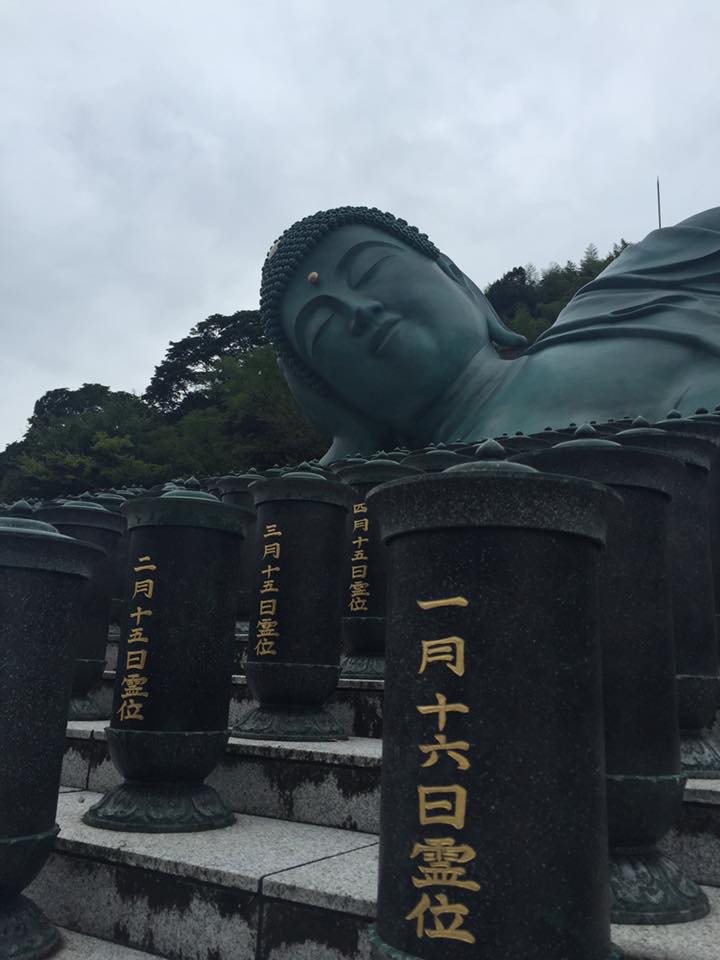 Close up of the face of the Buddha.

You can sit in shelters facing the Buddha, and marvel at its size, beauty, and the tranquility of the area. By the feet of the Buddha, you can find a small stand selling omamori. They even have games you can play to win prizes, a nod to the temples’ reputation as lucky. You can also walk behind the Buddha, where you will find what appears to be an administration building of some kind, statues, and a huge Mala (Buddhist prayer beads, they sort of look like Rosaries). Start at Buddhas head, enter the passage, and end up at the previously mentioned omamori stand. 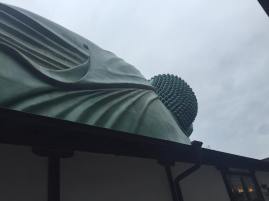 Buddhist statues, a shot of the Buddha from behind, and the large Mala.

Sadly, I can’t find much information on this, but I can tell you it’s called Nanten Inari Shrine. It nestles in a wooded area within the grounds of Nanzoin Temple. At the base, near the Koi pond, is a Benzaiten statue, which could lead you to believe this is a Benten shrine, rather than an Inari one. You pass through an orange Torii (gateway), and ascend a set of stairs to reach the Honden (main shrine building). The stairs are lined on both sides by orange lanterns. It’s pretty and peaceful. It has several characteristics of an Inari shrine, such as the distinct orange Torii, but lacked others, such as Kitsune (fox) guardians at the entrance and multiple Torii (see my post on Fushimi Inari Taisha, a famous Inari shrine in Kyoto). 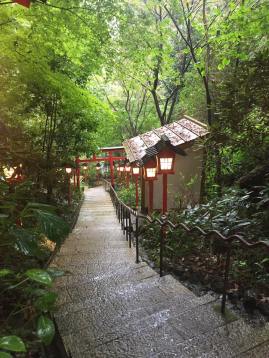 Benzaiten statue, Honden, and the path leading up.

There are, however, a pair of Kitsune located up near the Honden. Inari shrines are very common in Japan, and are dedicated to Inari Ōkami (稲荷大神, also Oinari). A Japanese Kami (God) of foxes, fertility, rice, tea, sake, agriculture and industry, general prosperity and worldly success, and one of the principal Kami of Shinto. In earlier Japanese history, Inari was also the patron of sword smiths and merchants. 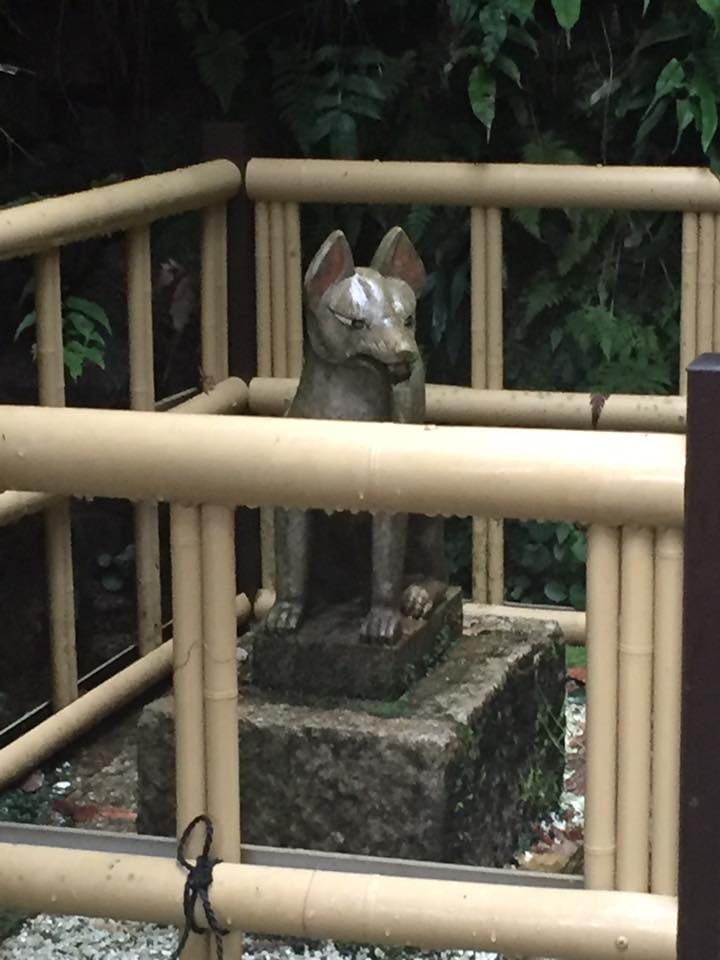 One of the two Kitsune statues of Nanten Inari.

Other chapels of worship within Nanzoin.

There are many chapels of worship contained within Nanzoin. Coming back past the Inari shrine, and through the tunnel, you can go up a flight of stairs to another area of worship. There is a large stand selling omamori, an incense pot, and a platform containing all the items you typically see in a Buddhist hall of worship in Japan. It’s adorned with golden statues and lanterns, the smell of incense wafting out, inviting you in. It also has a beautiful outlook into the forest lined mountains. 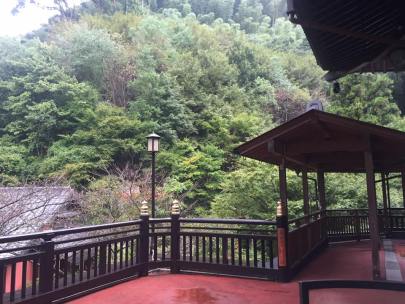 The gold adorned temple, and the view from its platform.

You will also find chapels scattered elsewhere, including in a cave, and up small, winding paths. 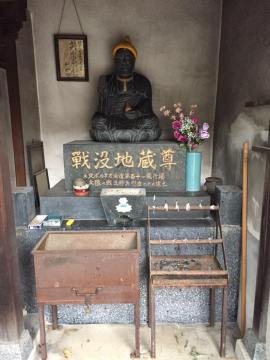 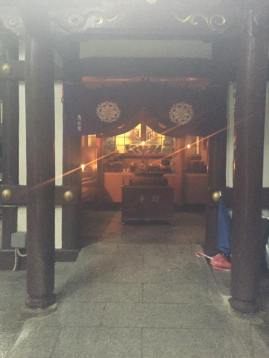 Other chapels of worship.

Another famous resident of Nanzoin is the large statue of Buddhist fire deity Fudo Myoo Sama. Sitting at an impressive 10-11 metres high and in full colour, he is a sight to behold.

Other notable features of Nanzoin.

Nanzoin is also home to many Arhat statues. 500 to be exact. Arhat are the followers of Buddha. You can find them lining hillsides within the grounds of Nanzoin, casting, calm, watchful eyes over the areas below. 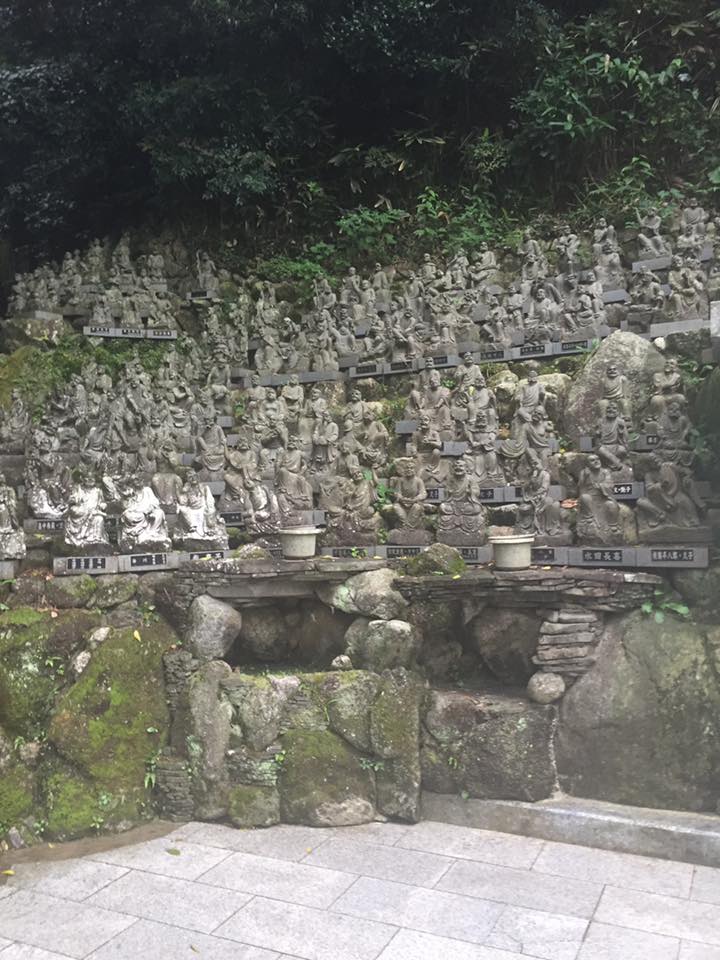 Just a few of the many Arhat in residence at Nanzoin.

Close to Fudo Myoo Sama, you will find a turtle pond. Turtles are said to be purveyors of wisdom and longevity in Buddhism, and are an important feature. 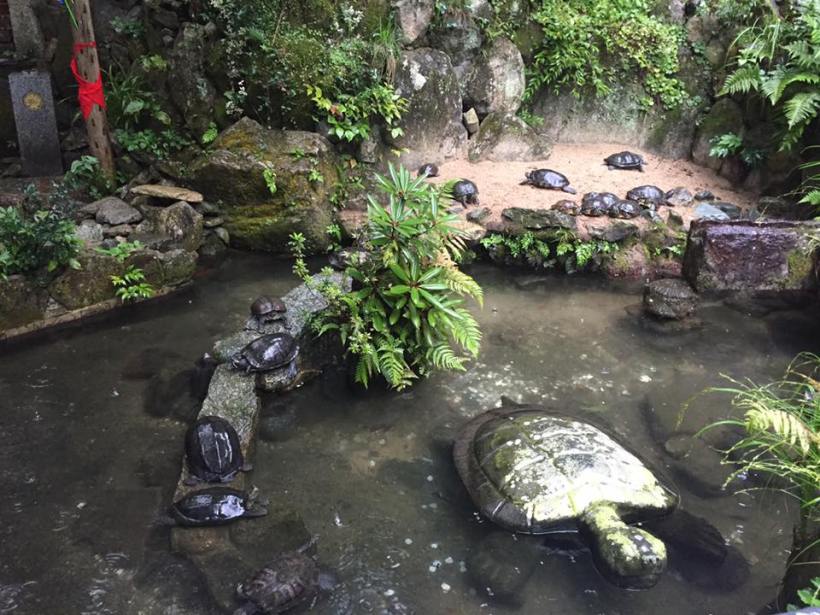 Finally, you’ll also find Sake barrels, lanterns, many more statues, and a large Maneki Neko. Don’t forget to rub the belly of the lucky Buddha as you depart. 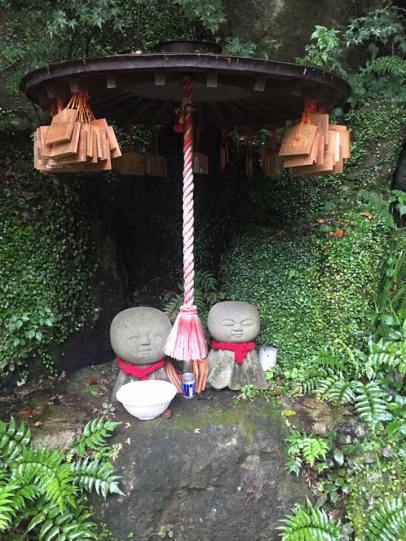 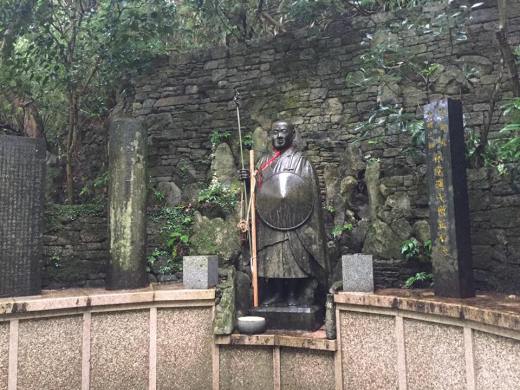 If you wish to visit Nanzoin for yourself, find it here.

Saying goodbye to Nanzoin with a rub of the lucky Buddha!

One thought on “Nanzoin Temple.”